From August 24 to 28, 2019, Thu Dau Mot University and Truong Vinh University (Taiwan) conducted cultural and sporty exchanges activities between two universities for lecturers and students, with lots of interesting contents such as sightseeing, learning about the culture, history, people in Binh Duong and the Southeast provinces of Vietnam, competing in a football match.

After the friendly match of students, that's the match between the lecturers and staffs of two universities which took place on August 27, 2019. With the high spirit, the players of two team competed enthusiastically, this does not only bring an interesting and fair match but also spread the spirit of friendship and good cooperation of the staffs of the two universities. The match ended with a score of 1 - 1. The team of Thu Dau Mot University officially accepted an invitation to join the exchange program at Truong Vinh University in the next time.

In the framework of exchange activities, students of Truong Vinh University paid a visit to learn about the ceramics in Binh Duong Province, Tuong Binh Hiep lacquer village, Ben Duoc - Cu Chi tunnel relic sites. Through the program, the staffs of the two universities had the opportunity to learn about the environment, culture, traditions, and people in the Binh Duong Province in particular and the Southeast region in general. Especially, through the program, students of Thu Dau Mot University expanded their relationships, accumulated more knowledge, communication skills and confidence when interacting with international friends. The players of the two universities confidently participate in the match, creating an exciting and exciting atmosphere. The players showed their great spirit on the pitch, creating attractive situations, and beautiful goals. 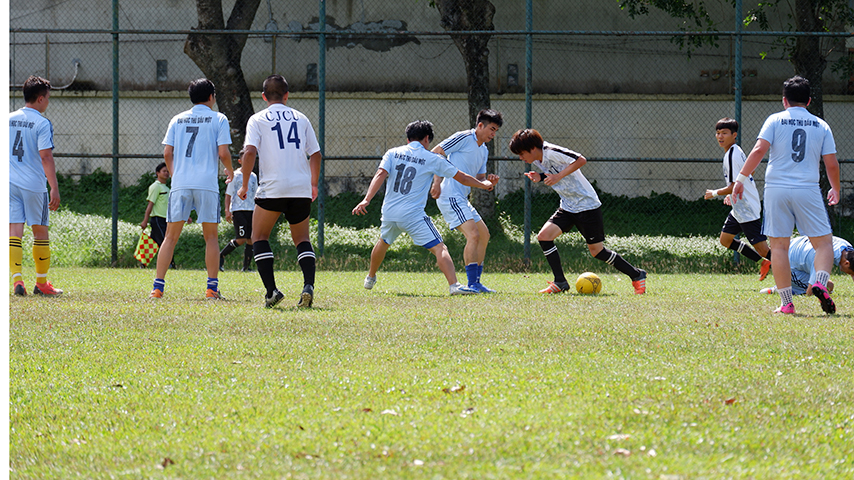 With the high spirit, the players competed enthusiastically, this does not only bring an interesting and fair match but also spread the spirit of friendship and good cooperation